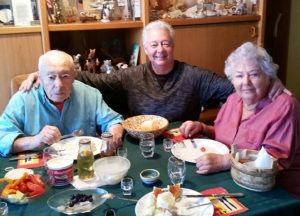 Alex Ayzin with his Parents

The story of how and why one man, a private citizen, decided to commission two symphonies in an effort to change the world starts by knowing he is the third generation from his family to serve in naval forces of Soviet Union, one of the most repressive regimes in history. To understand the mind and motivation of Alex Ayzin, one needs to take into account his family living in and military service for the Soviet Union, Russian history, World War II, the Cold War and beyond to the post-Soviet era, which started in late 1991. Raised in Odessa, the famed Black 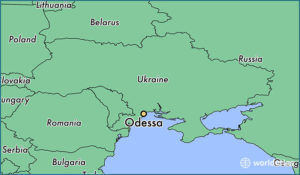 Sea port city in Southern Ukraine, he would naturally follow in the family tradition and seek a career in the Soviet Navy.

During World War II, called The Great Patriotic War, 1941-45 by Russians, Alex Ayzin’s grandfather saw action in the Soviet Navy while his father served in submarines as an academy cadet protecting Allied merchant convoys in the North Atlantic. For the Western Allies, it was vital to keep Russia supplied and fighting the Germans as they battled Japan and Germany on multiple fronts worldwide amid intense and massive preparations for the long-awaited and much-anticipated invasion of Northwest Europe. Losses on the convoy run to the Arctic port of Murmansk, especially early in the war before the Enigma intercepts tipped the

balance, were grievous with millions of tons of supplies and merchant seaman lost to German U-Boat attacks. Alex’s father served in the North Atlantic in what can only be described as hazardous duty.

Without Allied supplies, which involved everything from socks to aircraft, Russia would have had a much harder time pushing Germany back. Nazi Germany invaded Russia on a massive front with over 3-million troops, thousands of tanks and aircraft to begin the largest land war in history, and it was on the Eastern Front that 80% of all German troops were killed or taken prisoner during the Second World War. In a brutal war of annihilation, millions of Russian POWs captured in the early months of the war were simply left to starve to death in massive, open-air prison camps. 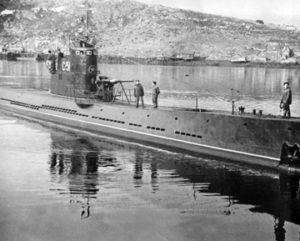 Every Russian was called to duty, such as the famed sniper Lyudmila Pavlichenko with 309 kills in The Battles of Odessa and Sebastopol. Like Alex Azyin, she was raised in Odessa on the Black Sea. Russia lost an estimated 25-million citizens of every ethnic background in a brutal war for control of European Russia, Central Asia and beyond. The battles are legendary: The 900-Day Siege of Leningrad, Stalingrad, The Battle of the Kursk-Orel Salient or the famed Partisans who valiantly fought behind German lines amidst the dense forests and meandering rivers of Russia. Germany planned to settle millions throughout the region as they cleared out or enslaved what they called Untermensch, the racially inferior sub-humans. Their brutality was returned in kind when the Red Army invaded Germany and exacted a revengeful bloodletting reminiscent of ancient battles. There was never a war like it in history and let us pray there never is again!

Being extremely proud the family Soviet Naval service in the defeat of Nazi Germany, Alex Ayzin followed in their footsteps by attending top Soviet maritime academies in anticipation of a career as a naval officer specializing in marine engineering. He grew up when the Soviet Union was one of two world superpowers, possessing large military forces spread around the world as the decades-long Cold War often became extremely hot. While Alex lived with his mother in Odessa, his father, because of a perceived lack of political reliability, was stationed at the Arctic port of Severomorsk, the Murmansk area base of the Soviet Northern Fleet, established in 1937, where hundreds of Soviet submarines operated from during the Cold War.

Alex’s father spent 12 years stationed in the Arctic, 1948-60, before resigning his naval commission and joining what was essentially the merchant marine division of the Soviet military tasked with shuttling supplies around the world. He participated in sealift operations during the Vietnam War, bringing supplies to the North Vietnamese, and would often deliver oil to Cuba as part of the Soviet Union’s subsidy program aiding the newly established Castro Communist Regime. This run was disliked among crews because of oppressive heat and humidity, with only the prospect of Cuban female companionship serving to buoy their spirits, so to speak. With the Soviet Union seeking and aiding allies around the world, Alex Ayzin’s father must have been to every corner of the globe delivering arms, supplies and natural resources to Soviet satellite states.

History Intervenes and Changes Everything 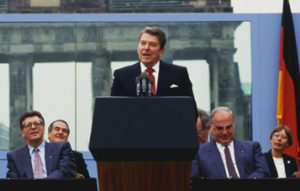 In the late 1970s, when Alex Ayzin was barely a commissioned naval officer in his early twenties, the Soviet Union had decided to invade Afghanistan and the Cold War was heating up as the U.S, led by President Carter, seemed to be tolerating Communist aggression rather than pushing back. Exploiting perceived or real weakness was and is a Russian specialty, but that equation would change after President Reagan took office in January 1981. Not even the most prescient political analysts and historians predicted what was going to happen in that tumultuous decade. But Reagan knew as he told confidants, “It is simple, we win and they lose.”

In 1979, the Ayzin family made a fateful decision: It was time to get out of the Soviet Union and defect to the West. Five family members, father, mother, grandmother, Alex, and his brother, collectively took the leap of faith from behind the Iron Curtain through the southern frontier of Russia. Considering their positions in the Soviet military, failure would certainly mean imprisonment in a Siberian or other prison camps.

Fudged travel documents were obtained, and they set out across the frontier by multiple trains to Czechoslovakia, still in Soviet territory, and then across the border to Austria and contact with an agency affiliated with the U.S. State Department tasked with aiding those seeking political asylum. From there it was on to Italy where the vetting process continued until the State Department was satisfied with their application.

After a few months in Italy, the Ayzin family landed at JFK and were personally handed documents which signaled the beginning of a new life in America. Alex continued his education at a top-maritime academy in New York as the final act of the Soviet Union played out during the 1980s. The Soviet Union would get bogged down in Afghanistan, their Vietnam, while President Reagan, British Prime Minister Margaret Thatcher, and Pope John Paul II began to turn up the heat politically, economically and covertly.

Alex Ayzin had been in the U.S., free from Soviet oppression, for six-years when, in 1986, two tragedies took place which revealed a path he never expected and would spend decades trying to understand. His reaction, born out of his upbringing and sense of history, became a mission wrapped up in and around the creation of high-art in the form of two symphonies, Concerto for Astronauts and Winds of Freedom.

The January 1986 Space Shuttle Challenger disaster: Like all young boys throughout the Soviet Union, Alex Ayzin viewed Russian Cosmonauts like Yuri Gagarin, the First Man in Space, as heroes to be emulated and followed into space. Gagarin was a great pilot and a man to be celebrated. So, when the Challenger blew up shortly after takeoff, with seven brave men

and women aboard, he took it to heart and found solace by expressing his grief and appreciation in a manner that only one person in the whole wide world did: Like an 18th century monarch, Alex Ayzin commissioned his own symphony, Concerto for Astronauts, from Russian composer Emilian Sichkin, as a tribute to the intrepid Challenger space explorers and all those like them

The April 1986 Chernobyl Nuclear Plant Meltdown & Soviet Collapse: The process of writing and producing Concerto for Astronauts took 18-months and during that time a major tragedy took place in Ukraine, Alex Ayzin’s homeland. Meltdown in a nuclear reactor blew the roof off the containment facility and the only remedy was sending in men to slowly cover the exposed core. Radiation was being blown into the atmosphere and time was of the essence. Reminiscent of a World War II battle, thousands of men were fed into the Chernobyl Nuclear Grinder and paid the ultimate price, with survivors suffering from radiation sickness. Make no mistake about it, The Battle for Chernobyl ranks alongside famous Russian battles in cost and sacrifice.

Alex Ayzin was devastated. After completion of Concerto for Astronauts in late 1988, with the Soviet Union becoming more chaotic and unpredictable, he decided to commission the Winds of Freedom Symphony as a celebration of Man’s Timeless Quest for Peace & Freedom. Three more years of mind-bending work and struggle, again with Emilian Sichkin, was debuted live at Carnegie Hall in New York City on May 11, 1991, to rave reviews and standing ovations. He pushed the composer to employ new electronic synthesizers in the mix with classical instruments and it worked. Winds of Freedom embodies all of Alex Ayzin’s hopes, ambitions, dreams, and desires for peace and freedom throughout the world.

Only one person in the world had the vision, drive, guts, and devotion to commissioning his own symphonies in the face of heartbreak and tragedy amid prayers for a better world. That person is Alex Ayzin.