This is a journey of one-man raised in Ukraine, then part of Soviet Union of Russian Republics, and trained to serve in the Soviet Navy during the Cold War; and an American raised on the opposite side of that Cold War divide, with veterans in his family both World Wars and the U.S. Civil who found himself, through work and circumstance, thrust into Russia history and culture to point that he possessed a unique ability to understand Ayzin and his motives, hopes and aspirations for the Winds of Freedom. Two people who came together by sheer chance because of a cup of hot chocolate and a patch teamed up working for Peace.

How many private citizens do you know who commissioned two full-length symphonies in an effort to change the world?

Well, now you know at least one and his name is Alex Ayzin

Following the early 1986 Challenger and Chernobyl disasters, Alex Ayzin did something amazingly unusual and totally unique. At his own expense, and with little idea of the task he had set up for himself, he commissioned two-full length symphonies from classically trained Russian composer, Emilian Sichkin. While having no formal musical training, Ayzin grew up with his father always playing the masters of classical music and so instinct and taste guided him on the path of creation with Sichkin.

First, 18-months after the January 1986 Challenger Space Shuttle explosion, came the moving tribute to those brave explorers of space and then, in 1991, with the Chernobyl nuclear meltdown disaster and a hot Cold War providing fresh motivation, the Winds of Freedom Symphony was released celebrating Man’s Timeless Quest for Peace & Freedom.

Working closely with a classically trained, highly-temperamental and extremely talented composer producing two full-length symphonies, over a five-year period of time, was a mind-bending struggle that required the patience of a saint, the wisdom of a sage and the focus of a scholar. Ayzin forced Sichkin to employ the latest electronic synthesizers, in tribute to Greek composers Yani and Vangelis, while story boarding his vision for both symphonies in a constant process of creation, destruction and more creation. Sichkin comes from a talented and respected musical family and was trained as a classical pianist at the finest Russian conservatories.

On May 11, 1991, the Winds of Freedom Symphony debuted live at Carnegie Hall in New York City, with a full orchestra and beautiful chorus, to rave reviews and standing ovations which proved to both of them how truly powerful the music they created had become. 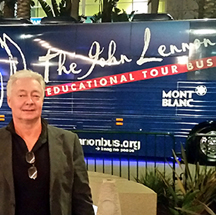 In 2016, Alex Ayzin married to the symphony to images and created the Winds of Freedom Documentary Video Presentation, see below, which combines stirring video and still images with the innovative and moving classical score to create an inspirational experience that brings a powerful message of hope in a chaotic world needing more peace and harmony among nations and people. While Concerto for Astronauts is a tribute to the brave astronauts lost on the Challenger, and in all risky exploration endeavors, the Winds of Freedom celebrates life, teaches history while inspiring peace and hopes for a brighter future.

Only one person in the world had the vision, drive, guts and devotion to commission his own symphonies in the face of heartbreak and tragedy amid prayers for a better world. To fully comprehend the motivation of this unique man, it is necessary to read Alex Ayzin: 1 Man, 2 Symphonies & A Mission of Peace & Freedom.